What is Free-Roam Virtual Reality?

Virtual reality is a computer-generated environment that allows a user to interact with three-dimensional images. It is often used in video games, simulations, and training programs. Virtual reality can create realistic environments that are not possible to experience in the real world.

Virtual reality is a simulated experience that can be similar to or completely different from the real world. Applications of virtual reality include entertainment (e.g. video games) and education (e.g. medical or military training). Other distinct types of VR-style technology include augmented reality and mixed reality.

What is Free-Roam Virtual Reality?

Free-roam virtual reality (VR) is a type of VR technology that allows users to move around freely in a virtual environment. Unlike traditional VR systems, which are tethered to a computer or console, free-roam VR gives users the ability to explore their surroundings and interact with objects and other people in the virtual world.

Free-roam VR systems are still in development, but they have the potential to revolutionize the way we experience virtual reality. Here’s everything you need to know about free-roam VR.

How Does Free-Roam VR Work? 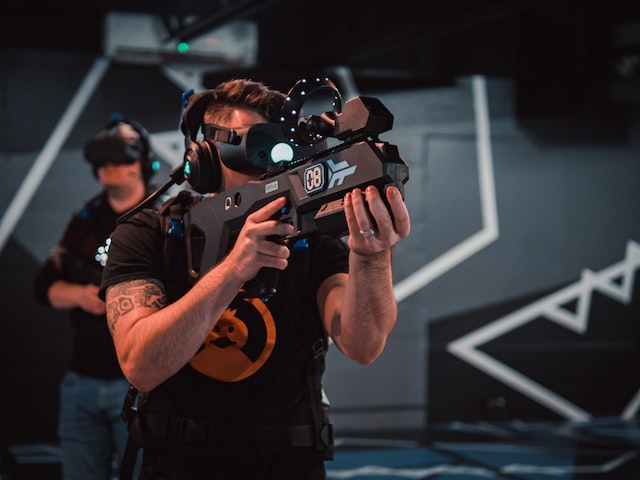 Photo by Maxime Doré on Unsplash

Free-roam VR systems use a combination of sensors, cameras, and tracking systems to allow users to move around freely in a virtual environment. These systems are typically composed of two parts: a base station that tracks the user’s movements, and a head-mounted display (HMD) that immersion them in the virtual world.

What Are the Benefits of Free-Roam VR?

There are a number of benefits that free-roam VR provides that regular VR does not. Here are some of the key benefits of free-roam VR:

1. Increased immersion: Free-roam VR allows users to move around freely in a virtual environment, which increases the sense of immersion.

2. Greater interactivity: Free-roam VR gives users the ability to interact with objects and other people in the virtual world, which makes for a more interactive and realistic experience.

3. Enhanced physicality: Free-roam VR systems can track the user’s movements and translate them into the virtual world, which can enhance the physicality of the experience.

What Are the Challenges of Free-Roam VR?

Free-roam VR is still in development, and there are a few challenges that need to be addressed before it can become a mainstream technology. These challenges include:

3. Safety: There are some safety concerns associated with free-roam VR, such as the risk of collision and the possibility of virtual reality sickness.

How Can Free-Roam VR Be Used?

Free-roam VR has a wide range of potential applications, including gaming, entertainment, education, training, and therapy. Here are some examples of how free-roam VR can be used:

1. Gaming: Free-roam VR systems can be used for a variety of gaming applications, such as first-person shooters, racing games, and puzzle games.

2. Entertainment: Free-roam VR can be used for entertainment applications such as virtual theme parks and movies.

3. Education: Free-roam VR can be used for educational purposes such as simulations and virtual field trips.

4. Training: Free-roam VR can be used for training purposes such as military training, police training, and firefighter training.

Free-roam VR has the potential to revolutionize the way we experience virtual reality. It is still in development, but it has the potential to Immersive users in a virtual environment like never before, and enhanced physicality will make the experience more realistic than ever before. free-roam VR systems are complex, and there are still some technical challenges that need to be addressed, such as latency and tracking issues. Additionally, free-roam VR systems are currently very expensive, which limits their accessibility. Despite these challenges, free-roam VR has a wide range of potential applications and could change the way we interact with technology forever.