What are Virtual Reality Arcades?

How Do Virtual Reality Arcades Work? 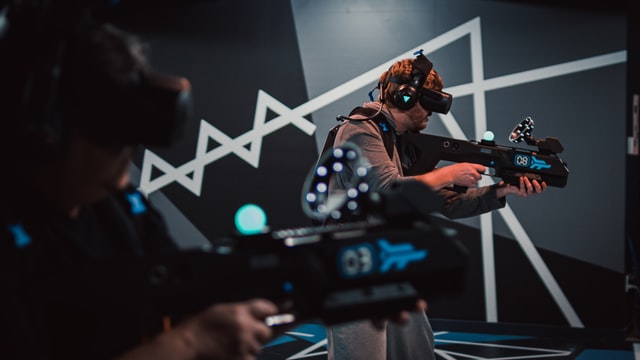 Photo by Maxime Doré on Unsplash

Time-based billing is great for people who want to try out VR without commitment. You can come and go as you please, and only pay for the time that you actually spend using the VR equipment.

No matter which billing method your VR arcade uses, you will usually have to pay for your time in advance. This helps the arcade keep track of who is using the equipment and when, and it also helps them to make sure that everyone gets a fair chance to play.

Virtual reality arcades use a variety of different VR systems, from high-end headsets like the HTC Vive and Oculus Rift to more affordable options like the Samsung Gear VR and Google Cardboard. They also have a variety of different games to choose from, so you can find something that interests you regardless of your taste. In addition to VR headsets, some arcades also have racing rigs and treadmills that you can use to further immerses yourself in the game.

Virtual reality arcades basically come in two different flavours: booths and free-roam. Booths are usually private rooms where you can put on a VR headset and play games without worrying about running into other people or objects. Free-roam VR, on the other hand, is exactly what it sounds like: you are free to move around in a designated space and interact with the virtual world around you.

Booths are great if you want to have a private VR experience, but they can be limiting if you want to explore a larger virtual world. Free-roam VR gives you the freedom to move around and really get lost in the game, but it can be more chaotic if there are a lot of people playing at once.

There are many benefits to virtual reality arcades. They are a great way to try out VR without having to commit to buying your own equipment, and they offer a variety of different games and experiences to choose from. You can also find them in most major cities, so you won’t have to travel far to get your VR fix. And because they use time-based billing, you can come and go as you please without having to worry about paying for more time than you actually use. So if you’re interested in trying virtual reality, be sure to check out a VR arcade near you!

The Best Games to Play at a Virtual Reality Arcade

There are a lot of great games to play at a virtual reality arcade. Here are some of our favorites:

Superhot VR is a first-person shooter where time only moves when you do. It’s a unique and challenging experience that is sure to get your heart racing.

In Job Simulator, you take on the role of various jobs in a virtual world. It’s a fun and zany game that will have you laughing out loud.

Arizona Sunshine is a zombie survival game set in the desert Southwest. It’s a terrifying and exhilarating experience that will have you on the edge of your seat.

Elven Assassin is a multiplayer VR game where you take on the role of an elf who must defend your village from waves of attacking orcs. It’s a great game to play with friends and family.

In general, multiplayer games are the best games to play at a virtual reality arcade because they offer a unique and immersive experience that you can’t get anywhere else. When you’re playing with friends, you can see and hear them in the game, which makes it feel like you’re really in the same place. You can also cooperate to achieve goals, or compete against each other to see who can get the high score. either way, multiplayer VR is a great way to spend time with friends and family.

How to Find a Virtual Reality Arcade Near You

If you’re interested in trying out virtual reality, the best way to do it is at a VR arcade. VR arcades are popping up all over the world, so it’s likely that there’s one near you. Here’s how to find a VR arcade near you:

1. Do a search online. A quick Google search will reveal all of the VR arcades in your area.

3. Ask around. If you have friends or family who are into gaming, they may know of a good VR arcade near you.

4. Once you’ve found a few options, give them a call and ask about their rates, hours, and policies.

5. Make a decision and head on down to the arcade!

Virtual reality is a great way to have fun and escape the real world for a while. With so many different VR arcades to choose from, you’re sure to find one that’s perfect for you. So what are you waiting for? Go find a VR arcade near you and start exploring the virtual world today!

If you haven’t tried virtual reality yet, you should definitely give it a go. VR arcades are the perfect place to try out VR with your friends and family without having to commit to buying your own equipment. And because they use time-based billing, you can come and go as you please without having to worry about paying for more time than you actually use. So if you’re interested in trying virtual reality, be sure to check out a VR arcade near you!