Virtual Reality (VR) has recently been explored as a potential therapeutic tool for individuals on the autism spectrum. This new approach to therapy may provide an array of benefits that traditional forms of therapy do not offer, such as providing a safe and immersive environment to practice social skills without fear of judgement or failure. In addition, VR can also be used to reduce anxiety and help process sensory stimulation in a controlled manner.

Overview of Autism and Its Challenges

Autism is a neurological disorder that affects people differently, but usually leads to difficulties in communication and socialization. Autistic individuals may display signs of sensory processing issues, difficulty with certain movements and behaviors, and reduced empathy or understanding of nonverbal cues. These symptoms can make it difficult for those on the autism spectrum to engage in activities or social interaction, which can lead to further stress, anxiety and depression.

Traditional treatment methods such as cognitive-behavioral therapy (CBT), speech therapy or occupational therapy have proven useful for some people, but they are not always accessible or effective for those on the autism spectrum. This is why virtual reality technology is an exciting new approach to treating autism; it provides an immersive environment where individuals can practice their skills without fear of judgement or failure while also allowing them to build confidence in their abilities over time. Additionally, VR can help with sensory processing issues and reduce anxiety associated with unfamiliar situations, ultimately leading to improved engagement with activities and greater self-regulation.

Overall, virtual reality technology has the potential to revolutionize autism therapy by providing a safe, immersive environment that can be tailored to an individual’s specific needs. As this technology continues to grow in popularity and accessibility, it is important to recognize the potential benefits it may bring for individuals on the autism spectrum who seek additional support in their treatment.

Virtual Reality (VR) is a rapidly growing technology that allows users to experience a simulated environment through immersive technologies such as 3D images, audio and tactile sensations. Through the use of VR headsets or other specialized devices, individuals can engage in virtual experiences that mimic real-life activities such as exploring different environments, playing games or interacting with virtual characters. This technology has become increasingly popular for entertainment purposes, but there are also many therapeutic applications for VR as well.

VR can be used to help individuals develop motor skills, empathy, emotional regulation and communication skills – all of which are essential when managing autism symptoms. Furthermore, the immersive nature of this technology allows autistic individuals to practice their skills in a safe space without fear of failure or judgement from others. This encourages confidence building over time and leads to increased engagement with activities, ultimately resulting in better outcomes for those on the autism spectrum.

Benefits of VR and Autism

Virtual Reality has several potential benefits for individuals on the autism spectrum. As mentioned before, VR can help with motor skills, empathy and communication by providing a safe space to practice these abilities without fear of failure or judgement from others. This can lead to increased confidence and improved social skills over time. Additionally, the immersive environment provided by virtual reality technology can help reduce sensory processing issues and anxiety associated with unfamiliar situations. By immersing autistic individuals in an environment that is tailored to their specific needs, they are able to explore at their own pace while building trust in themselves and their abilities.

VR also has the potential to help autistic individuals develop better self-regulation skills by providing a non-threatening environment that they can control and feel comfortable in. This is critical for those on the autism spectrum, as it can lead to reduced stress levels and improved engagement with activities. Lastly, virtual reality technology can be used to expose autistic individuals to real-life social scenarios without placing them in uncomfortable or overwhelming situations. This allows them to practice their communication and empathy skills while gaining confidence in themselves and their abilities. 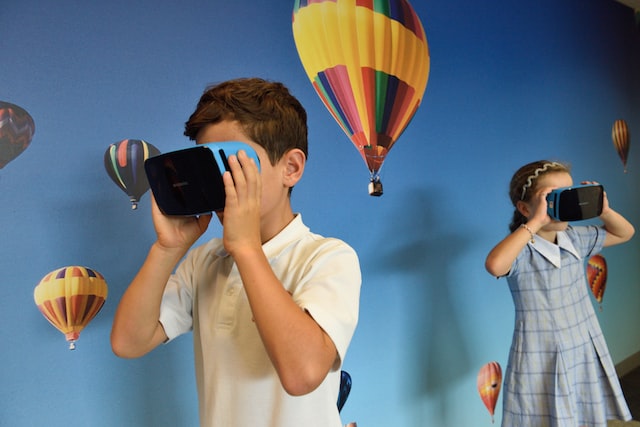 Photo by stem.T4L on Unsplash

Virtual Reality has already been used in a variety of real-world applications for autism therapy. For example, VR technology has been utilized to help autistic individuals practice their communication and socialization skills as well as improve sensory processing issues. Its immersive nature allows users to explore at their own pace and gain confidence in themselves and their abilities.

VR technology can also be used to expose autistic individuals to unfamiliar environments that they may not be able to experience in the real world due to safety or accessibility reasons. This can include virtual simulations of busy city streets, airports, hospitals, or even tourist attractions such as theme parks or aquariums. By doing so, these individuals can build familiarity with new situations without having to face them in person – enabling them to practice their social skills in a safe, controlled environment.

Moreover, VR technology can be used to create personalized activities for autistic individuals to explore and engage with on their own terms. This could include interactive stories or educational games that are tailored to the individual’s interests and abilities, allowing them to work on critical skills such as communication and problem solving at their own pace.

One study, published in the Journal of Autism and Developmental Disorders, found that VR was effective in improving social skills in children with autism. The study used a VR game called “The Virtual Social Interaction Trainer,” which is designed to help individuals with autism practice social interactions in a safe and controlled environment. The game allows users to interact with virtual characters and practice conversation, eye contact, and other social skills.

The study included 20 children with autism between the ages of 8 and 12. The children were divided into two groups, with one group receiving VR training and the other receiving traditional face-to-face training. The study found that the VR group showed significant improvement in social skills, including conversation, eye contact, and social engagement, compared to the face-to-face group.

Another study, published in the Journal of Autism and Developmental Disorders, used VR to teach children with autism about emotions. The VR experience, called “The Virtual Emotion Recognition Training,” allowed children to “see” emotions on the faces of virtual characters and learn to recognize and interpret them. This can be especially helpful for children with autism who may have difficulty interpreting nonverbal cues.

The study included 25 children with autism between the ages of 7 and 13. The children were divided into two groups, with one group receiving VR training and the other receiving traditional training. The study found that the VR group showed significant improvement in their ability to recognize and interpret emotions, compared to the traditional group.

Conclusion – Exploring the Possibilities of This New Form of Therapy

The potential for Virtual Reality to help those with autism is immense. Its immersive nature allows users to practice their communication, empathy and motor skills in a safe, controlled environment while reducing sensory processing issues and anxiety associated with unfamiliar situations. Furthermore, its ability to create individualized activities tailored to an individual’s specific interests and abilities can help them build confidence in themselves and their abilities.

As VR technology continues to advance, the possibilities are endless when it comes to exploring new applications for treating autism symptoms. More research into this area needs to be done before it can be fully utilized as a form of therapy; however, the potential for virtual reality technology has already shown promise for helping autistic individuals gain greater independence and confidence in themselves. With further exploration, VR may become an invaluable tool for treating autism symptoms in the future.