The History of Virtual Reality

Most people are familiar with virtual reality (VR) in some capacity, whether they have experienced it firsthand or not. VR is a computer-generated simulation of a three-dimensional environment that can be interacted with in a seemingly real or physical way by a person using special electronic equipment, such as a helmet with a screen inside or gloves fitted with sensors.

The invention of VR is largely attributed to Ivan Sutherland, who created the first VR headset called “The Sword of Damocles.” However, the concept of VR dates back much further than that. In fact, one of the earliest examples of VR can be found in the short story “Pygmalion’s Spectacles” by Stanley G. Weinbaum, which was published in 1935.

The idea of VR continued to be explored in the following decades through various works of science fiction, such as the 1957 novel “Bridge” by William Gibson, and movies like “Tron” in 1982. But it wasn’t until the 1990s that VR became a reality with the invention of affordable consumer headsets, such as the Nintendo Virtual Boy.

Since then, VR has come a long way. It is now being used for everything from entertainment and gaming to education and training. And with the ongoing development of new technologies, it is only going to become more realistic and widespread in the years to come.

Who is Ivan Sutherland?

Ivan Sutherland is a computer scientist and engineer who is widely considered to be the father of computer graphics. He has made many important contributions to the field, including the development of the first VR system. He is also known for his work on Sketchpad, one of the first graphical user interfaces. Sutherland has been honored with numerous awards, including the Turing Award, the highest honor in computer science.

The idea for the “Ultimate Display” came to Ivan Sutherland while he was working on a military project that involved creating three-dimensional simulations. He realized that it would be possible to create a system that would allow users to interact with computer-generated objects in a realistic way. This was the first time that the idea of virtual reality was proposed.

Sutherland went on to develop the first VR system, which he called “The Sword of Damocles.” The system was made up of a head-mounted display with two CRT screens and sensors that tracked the user’s head movements. However, the system was very bulky and expensive, making it impractical for general use.

Despite this, Sutherland’s work laid the foundation for all future VR systems. His invention of the head-mounted display is an essential component of modern VR headsets. And his work on interactive computer graphics laid the groundwork for many of the graphical user interfaces that we use today.

The first VR systems were very primitive by today’s standards. They only simulated 2D images and did not provide any interaction with the virtual world.

One of the earliest VR systems was called The Sword of Damocles used a computer to generate simple wireframe images. These images were displayed on a cathode ray tube (CRT) monitor in front of the user.

The user wore special goggles that allowed them to see the images on the monitor. The goggles also had sensors that tracked the user’s head movements. This information was used to update the images on the screen, so that it appeared as if the user was looking around in a 3D environment. 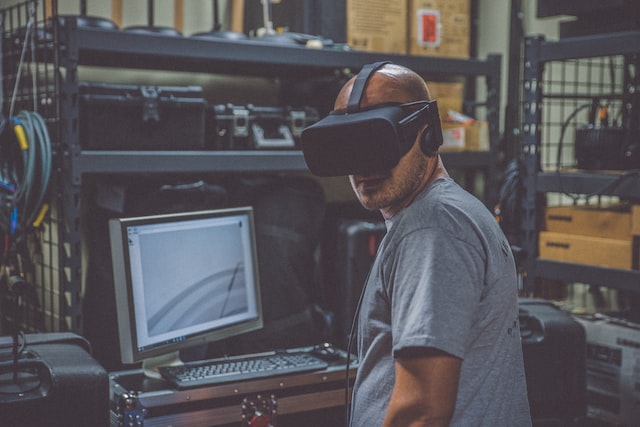 Photo by Eddie Kopp on Unsplash

Modern VR systems are much more advanced than early VR systems like The Sword of Damocles. They can generate realistic, 3D worlds with sound, movement, and even smell.

Most modern VR systems use a process called photogrammetry to create the virtual world. Photogrammetry is the process of taking measurements from photographs.

With photogrammetry, VR developers can create virtual worlds that look and feel just like the real world. Developers can also add interactive elements to the world, so that users can interact with their environment.

VR systems are also becoming more portable and affordable. Consumer-grade VR headsets like the Oculus Rift and HTC Vive are now available for purchase. And, there are even mobile VR headsets like Google Cardboard that work with smartphones.

This means that VR is no longer just for gamers and early adopters. VR is becoming more mainstream and accessible to everyone.

It’s amazing to see how far VR has come since Ivan Sutherland first proposed the idea in 1965. What started as a crude, 2D simulation has become a realistic, 3D world that anyone can experience.

VR is still in its early stages and there is a lot of room for improvement. However, the invention of VR has changed the way we interact with computers and the world around us. It is an amazing technology with endless potential.

In the distant future, we may even see VR technology merge with augmented reality (AR) to create an even more immersive experience. This would allow users to interact with virtual objects in the real world.

So, what does the future hold for VR? Only time will tell. But one thing is for sure: the future of VR is looking very bright.