How Does Virtual Reality Work?

Virtual reality (VR) is a computer-generated environment that lets you experience a different place or scenario. It immerses you in an experience by stimulating your senses, including sight, hearing, and touch.

VR was first used in the 1950s as a way to train pilots in flight simulators. In the 1980s, VR began to be used in arcades as a way to give gamers a more immersive experience. In the 1990s, VR was used mostly for gaming and entertainment applications.

Now, VR is being used for a variety of purposes, including education, training, healthcare, and even therapy. The potential applications for VR are endless.

How VR Works: The Science Behind Virtual Reality Technology

The first VR systems were very primitive by today’s standards. They only simulated 2D images and did not provide any interaction with the virtual world.

One of the earliest VR systems was called The Sword of Damocles. It was created in 1968 by Ivan Sutherland and his student, Bob Sproull. The system used a computer to generate simple wireframe images. These images were displayed on a cathode ray tube (CRT) monitor in front of the user.

The user wore special goggles that allowed them to see the images on the monitor. The goggles also had sensors that tracked the user’s head movements. This information was used to update the images on the screen, so that it appeared as if the user was looking around in a 3D environment.

Despite its primitive graphics, The Sword of Damocles is considered to be the first VR system. It laid the foundation for modern VR systems. 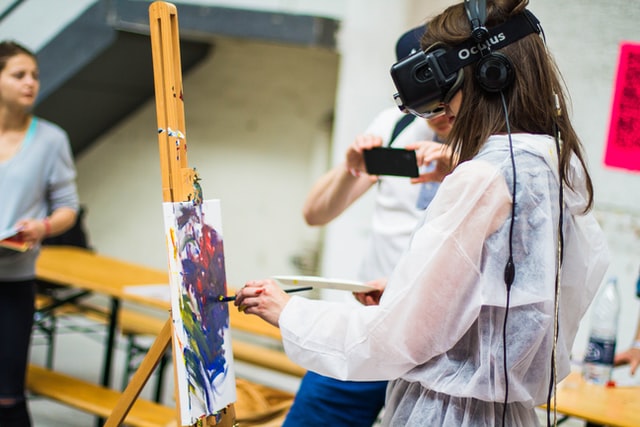 Photo by Billetto Editorial on Unsplash

Modern VR systems are much more advanced than early VR systems like The Sword of Damocles. They can generate realistic, 3D worlds with sound, movement, and even smell.

Most modern VR systems use a process called photogrammetry to create the virtual world. Photogrammetry is the process of taking measurements from photographs.

With photogrammetry, VR developers can create virtual worlds that look and feel just like the real world. Developers can also add interactive elements to the world, so that users can interact with their environment.

VR systems are also becoming more portable and affordable. Consumer-grade VR headsets like the Oculus Rift and HTC Vive are now available for purchase. And, there are even mobile VR headsets like Google Cardboard that work with smartphones.

This means that VR is no longer just for gamers and early adopters. VR is becoming more mainstream and accessible to everyone.

VR Capabilities: Some Examples of What VR Can Be Used For

VR can be used for a variety of purposes, including education, training, healthcare, and even therapy. The potential applications for VR are endless.

Here are just a few examples of what VR can be used for:

Education: VR can be used to create immersive learning experiences. For example, students can use VR to take virtual field trips to historical landmarks or natural wonders.

Healthcare: VR can be used to treat conditions like anxiety and post-traumatic stress disorder (PTSD). VR can also be used to help people with physical disabilities, such as paralysis.

Therapy: VR can be used to help people overcome their fears and phobias. For example, people with a fear of heights can use VR to slowly desensitize themselves to heights.

These are just a few examples of how VR can be used. The possibilities are endless. And, as VR technology continues to improve, the potential applications for VR will only increase.

The future of VR technology is looking very promising. With the rapid advancements in VR technology, it is not hard to imagine a future where VR is commonplace.

In the distant future, we may even see VR technology merge with augmented reality (AR) to create an even more immersive experience. This would allow users to interact with virtual objects in the real world.

So, what does the future hold for VR? Only time will tell. But one thing is for sure: the future of VR is looking very bright.